Written by Staff Wednesday, May 04 2022, 6:00 AM
Article continues below advertisement ↴

Close to 80 artists, and over 100 pieces, were featured at this year's Westman Juried Art Show, held in Killarney this past weekend.  However, for Boissevain artist, Nancy Penner, it was a delightful surprise to see her two submitted pieces to have received attention by the judges.

Both of Penner's charcoal pieces were chosen to participate in the two upcoming shows; the Travelling Gallery (already in motion) and the Northern Exhibition in Winnipeg, for later in September.

But even more moving for the charcoal artist, Penner received the award for 'Best of Show' for a rendition of a photograph of her mother and aunt taken 73 years ago, when the sisters were in their late teens.

"Because of the theme of 'Relationships' I chose to do a picture of my mom and my aunt from 1949," she explains. "I used charcoal to do it. I felt that I could create the expression I wanted, and it just really fit into the theme of relationships with the medium of charcoal.  And then, I was fortunate to find a frame from the early 1950's at our local thrift store here in Boissevain that fit just perfectly!"

To receive 'Best of Show', Penner says it was both humbling and shocking.  "I am a new artist and I did not expect this at all," she shares. "To be chosen by the judges really affirmed to me that I'm on the right track and art is something that I can pursue."

The Boissevain artist decided to pick up a pencil and try her hand at drawing about 5 years ago. Checking out different websites and online tutorials continued to pique her interest.   "One day I just said, 'I'm going to draw!'" she laughs.  Finally, taking a charcoal drawing workshop with sister-in-law, Jill Sawatzky, at the Boissevain Arts Council, "that's what catapulted my love for charcoal," she adds.

Capturing the deep relationship of such a special picture of her mother and her aunt, Penner had to try a couple of times to get just the right portrayal on her canvas.  Nancy Penner's mother, Edith Sawatzky, was 18 years old when the photo was taken.  The charcoal piece had to be just right, and it took hours of work to be ready for show.

"This particular picture took me a few attempts, because I just wasn't happy with the progress," she shares. "Because I put extra love and care into the final picture, it took me probably about 20 hours."

Penner's favorite subject is to draw birds on canvas and then to highlight certain portions of the picture with watercolor.  She will be sharing (and selling) her work at the Irvin Goodon Wildlife Museum in Boissevain this summer.

Nancy is surrounded by art-lovers in her family.  Nancy's late father, Nick Sawatzky, enjoyed painting landscapes and carving birds and animals.  Her brother Reg, shares his artful eye through the lens of his camera, capturing the beauty of Manitoba's landscapes, and history in old, forgotten buildings, and artifacts hidden in shelterbelts or abandoned yards. Brother, Clarence, is known for his sculptures of wildlife native to Manitoba. Penner's other sister-in-law, Betty Sawatzky, also enjoys a variety of mediums, including charcoal; her art piece received the People's Choice Award at Sunday's exhibition.

Over the past 2 years, the Westman Juried Art Show was held virtually.  Being able to meet and celebrate art together at the Killarney Legion on the Sunday afternoon was absolutely wonderful, says Penner.  "To be with other people again, and mingle and chat.  You don't get to chat with judges or other people online like you do in person, so it was great to get feedback from them in person, and just be able to see what other artists are doing and encourage one another, really.  It was wonderful!"

Twenty pieces were chosen to participate in the Westman Travelling Gallery over the next 12 months.  From these 20, ten pieces were chosen to represent Westman later in September at the Northern Exhibition in Winnipeg where pieces from all 5 regions of Manitoba are displayed (this year once again virtually).

The Travelling Gallery will be visiting 18 communities in the Westman Region from now until May 13, 2023.

Visit www.artswestcouncil.ca for when the Travelling Gallery is visiting the community closest to you.

Pictured below:  Red ribbon winners and sisters-in-law, (l-r) Betty Sawatzky and Nancy Penner with their award-winning pieces of 'Storytime Adventures with Dad' (People's Choice Award) and 'When We Were Young' (Best of Show) respectively 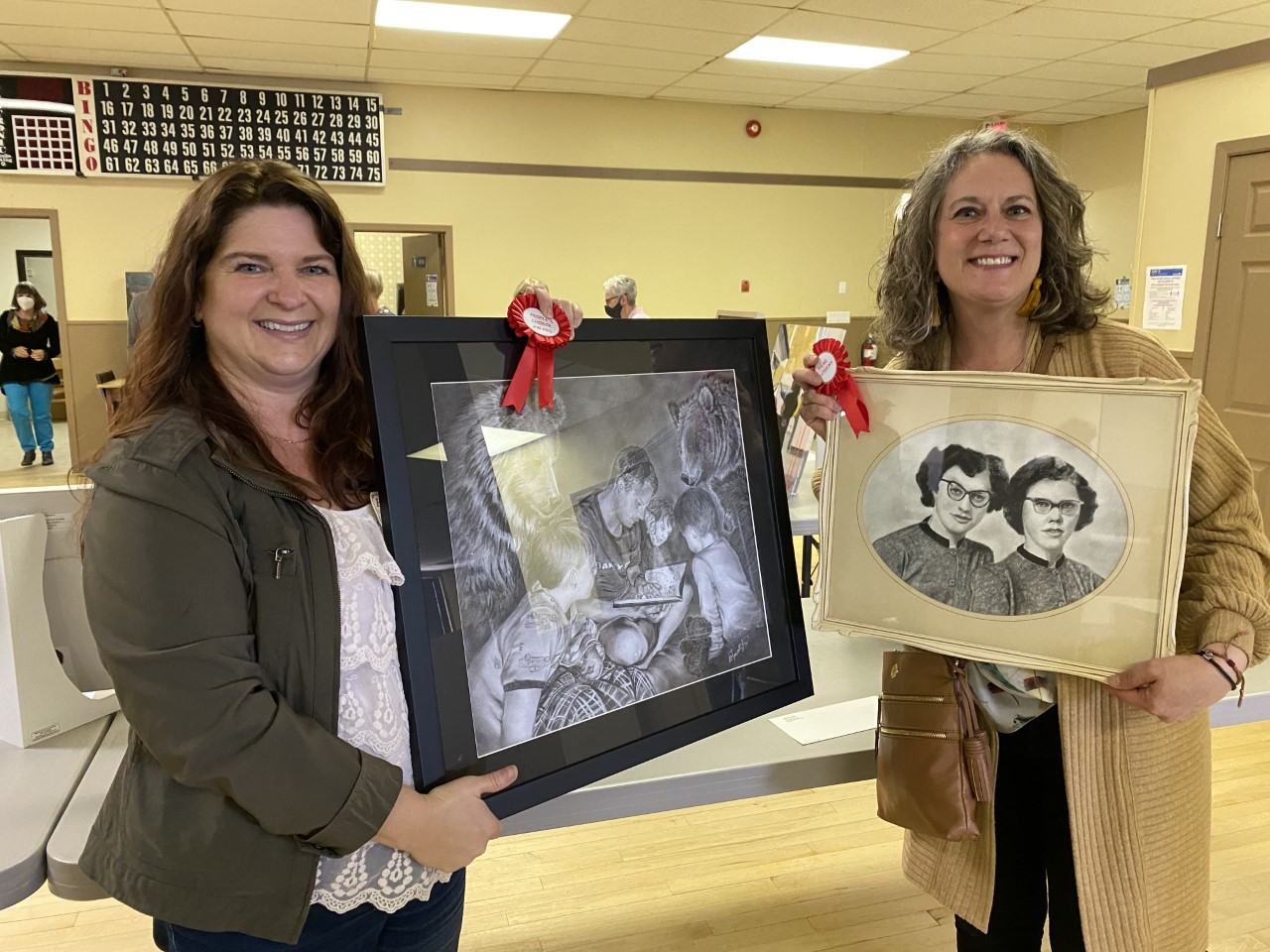