The Municipality of Killarney-Turtle Mountain held their public hearing on the most recent proposal for the building of a new HyLife barn on Highway 253, following the completion of the Technical Review Committee’s (TRC) final report.

Over 100 people were in attendance at last night’s meeting at the Shamrock Centre, with the majority being home and cottage owners from Pelican Lake, all in direct opposition to the building of this hog operation at this location.

Many took the podium to voice their concerns, the biggest complaint being its proximity to Pleasant Valley and Pelican Lake, the potential affects and concerns: animal odor from barn fans, manure pit and field application, water sustainability and water source depletion, additional traffic of heavy trucks and the required road maintenance on the 253, a highway that is already in poor condition, and the addition of yet another 3 barns to the hog barns already established in the area.

The concerns about the negative impacts on the community surrounding Pelican Lake went beyond the noxious odor of the barns, or spreading of manure. Water run-off from the fields freshly treated with manure running into ditches and then into tributaries that lead to Pelican Lake and the Pembina River, was the concern most loudly voiced.

Landowners shared how the efforts of Pelican Lake’s Healthy Lake Committee, over the past half-dozen years, to pursue cleaner, healthier water through their two aeration field systems has shown positive results. Their efforts to deter blue-green algae, reverse winter fish kills, and revive water sports and recreation have proven to be effective. High nutrients in water run-off into Pelican Lake through the Pembina Valley water shed could prove to be disastrous for those living downstream.

The Province of Manitoba’s four representatives answered a series of questions by concerned citizens about the risk of water quality to underground reservoirs, and water run-off into ditches and tributaries. While the Province did confirm they continuously monitor water quality and available accessible amounts of water through a proposed well (which would facilitate the operation’s water consumption rate of 19,800 imperial gallons per day), they also confirmed that the water run-off into the ditches is not monitored for water quality and high nutrient levels.

Todd Shewfelt has been a cottager on Pelican Lake for almost 50 years, and was thankful for the many people who came and voiced their concerns. “This is a hog barn proposal that is extremely close to the Pembina River and Pelican Lake, that will affect Rock Lake and other lakes downstream. This is very high risk, as the land is very sloped. Most of the land they proposed to spread their manure on drains into the lake or Pembina River, and with the weather we’ve seen lately, it's just a matter of fact that the manure that they put on the fields is going to wind up in the lakes and rivers and pollute them.”

“As we’ve seen tonight, there’s not a lot of scrutiny of whether those [nutrients] leave those fields and that it’s purely due diligence on the owners of the operations to monitor that,” continued Shewfelt, “and they’ve openly acknowledged they only monitor what they put on the field. They don’t verify whether or not it runs off their fields and into the water shed.”

“The massive development in the hog industry; there’s just so much more of it and it is concerning that this manure goes on the fields in the fall and the spring run-off carries it all over the place and in our rivers and streams. I really hope that Council is going to take this very seriously and hopefully ask that this be re-located further away from the watershed,” he added.

“I think everyone tonight is simply asking, ‘Please find a better location for this development. Please put the hog barns and manure much further away from the Pembina River and Pelican Lake,” concluded Shewfelt.

“People are obviously concerned and they have valid concerns; [regarding] water, air quality,” shared Killarney Mayor, Merv Tweed. “These are all things, as Council, that we have to take into consideration when we make our decisions and when you sit in front of the public and hear what they have to say, it helps you focus a little bit more.”

“Consideration should be made for how close this is to a very large recreation area. In addition to our campground is the golf course, a glamping rental business and at least one Air B&B, all of which in my opinion could be negatively affected by the physical location of this operation,” she said.

“I respect that this will be a very difficult decision for council to make since HyLife is an important contributor for many in this community, but seeing the concern and care you’ve shown for Killarney Lake and the realization of the vital role that it plays in the community and your economy, I would believe that council also knows the value of our lakes and rivers for tourism opportunities and enjoyment for the local community.”

It’s important to note that HyLife has been a positive addition to the area. Residents and visitors to Killarney-Turtle Mountain have benefited greatly from this partnership. Since January 1, 2020 HyLife has contributed more than $1.2 million to local community organizations and charities. Of these donations, HyLife contributed $750,000 in hospital donations alone, including $100,000 to the Tri-Lake Health Centre in Killarney. HyLife also donated $38,500 to the Killarney Flying Club, $5,000 to the local Arts Council, $5,000 to the municipality’s Fire Department, and $125,000 to STARS air ambulance services.

With this new build project, HyLife expects to invest $7.6 million in the municipality by employing 50-60 skilled tradespeople, utilizing local workforce and suppliers during the construction process. Also, this production site would consume an additional 4,500 tonnes of feed annually, much of which is expected to be sourced from local grain growers.

Within this municipality, HyLife runs 13 local livestock operations, as well as their feed mill, wash bay, office and distribution centre. Since 2017, they have invested over $80 million in southwestern Manitoba, and plan an additional $25 million investment in the next 2 years. They employ more than 139 full-time staff at their Killarney-TM operations, and their Killarney-Manitoba payroll exceeds $5.9 million annually. The newest addition would employ an additional 3 full-time staff members.

“It’s an interesting challenge when these two worlds collide,” shared Stott. “In some ways they are polar opposites, but in other ways they are connected because they rely on the landscape for their survival and their growth. This is kind of our first endeavor into this arena where we’re in this level of proximity to cottage country, though I will say we’re not the closest livestock operation to the cottagers by any stretch of the imagination. We felt that we were far enough that we were not impactful of the cottage area because we had a significant buffer to distance ourselves and the cottage country.”

“These evenings are always good,” added Stott. “It’s always good to have an opportunity to have the public comment on the different proposals in their area, and it’s always important to hear all sides to the story.”

“Council has a difficult decision ahead of them and I think they have to weigh the facts behind the TRC conclusion as to the sustainability of the site versus some of the emotional presentations that they heard here this evening,” he stated. “We’ll just have to await their decision, and we look forward to it.”

Mayor Tweed noted the strong message from the cottage and business owners of Pleasant Valley, “They were certainly heard tonight, I can tell you that, and obviously their concerns were incurred by all Council members and those are some of the things we need to work through to make a decision.”

Killarney-Turtle Mountain council will meet over the next few days,” he added. “Obviously, we’ll have more questions and then we’ll make a final decision.”

Once that decision is made, notification will be sent out and HyLife has a right to appeal, should the vote be ‘no’, or they can move forward with the build project if Council approves. 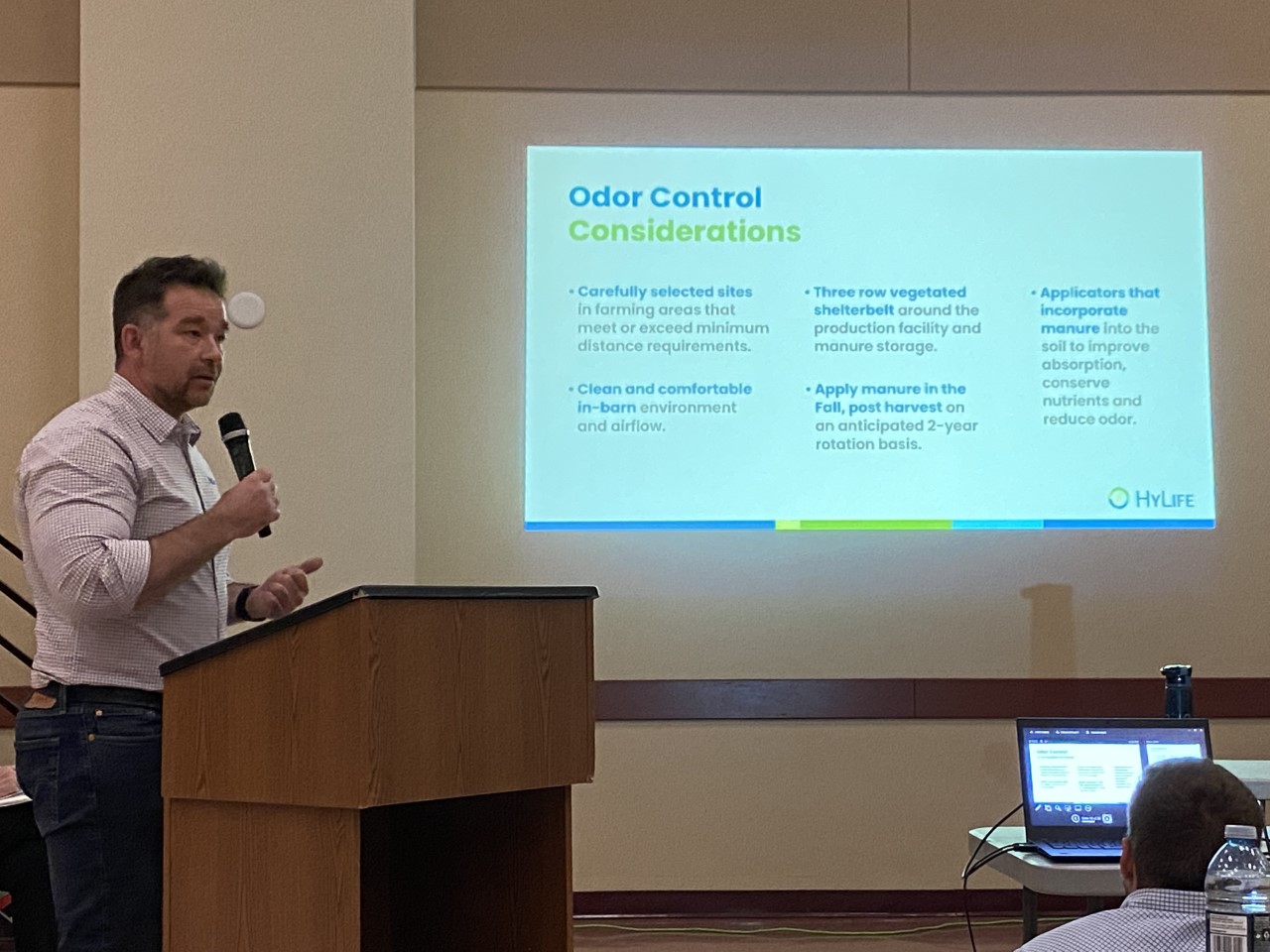 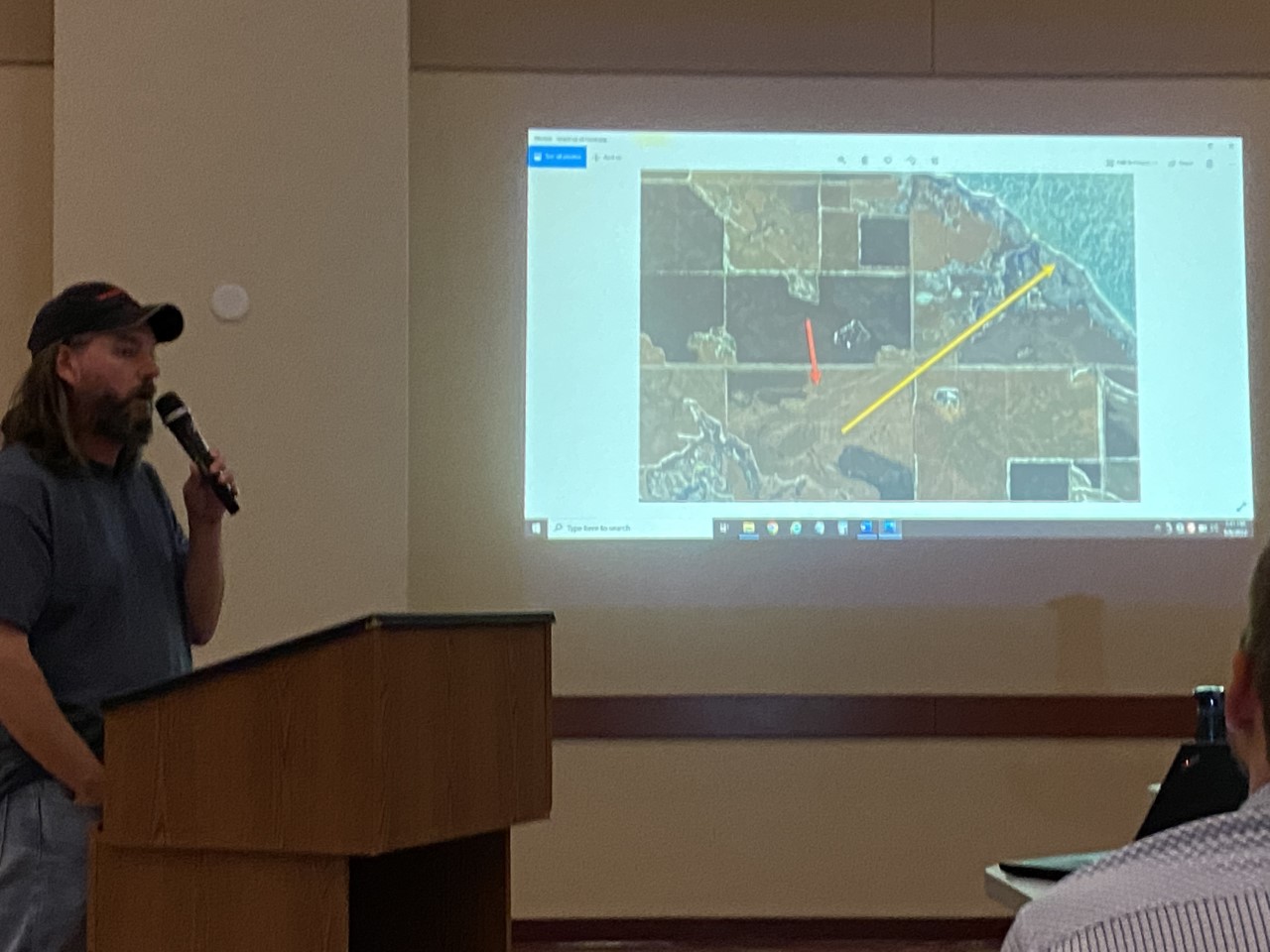