The J.A.V. David Museum in Killarney welcomed a special guest speaker on Wednesday evening who brought local history to life.

Dr. Kent Fedorowich was born and raised in Killarney, and returned to his home town for a high school reunion earlier this summer.

Following graduation from Killarney School in 1977, he pursued his passion for history with post-secondary education in Saskatoon, SK, and continued his studies in England in 1983 to eventually become a Professor of History at the University of the West of England Bristol, UK.

Dr. Fedorowich says his grandmother's storytelling inspired him to pursue historical study, with a specific passion for World War I.   "It was stories about migrants coming to Canada and the stories she told of growing up in Killarney, particularly in the '20's and '30's.  That inspired me to history, particularly migration history, because that's one of the things I did my PHD thesis on; returning servicemen who emigrated to Canada and Australia to take up farms. And, some of them farmed here in Killarney."

Throughout his studies, Fedorowich says he happened upon a few surprises, one being the number of Canadian servicemen who served in the first Canadian contingent at the start of WWI who were British-born migrants.

"It was 70% of that contingent, which would be about 23,000 men, who were British-born migrants.  Why that many? What was going on? There were a number of explanations," he notes "One, is they believed that the war was going to be short and was going to be over by Christmas, so why not get in on the big adventure?  You join the army, and you get 3 meals a day, there's a roof over your head, and you get free dental and free medical."

"You need to keep in mind that in 1913 there was a recession that was beginning to bite," he explains. "So, this might have been a free ticket home for the British.  So, in that respect you have to start looking at the economics.  The war didn't end by Christmas, and they kept going and going.  But, what I find interesting too, is the number of Canadians didn't actually reach a significant amount until the end of 1916 and early 1917."

Of the 30% of that first Canadian contingent who served in the First World War were soldiers who emigrated from Africa, Australia, New Zealand, and even the South Atlantic.  It's astounding to learn that over 140 nationalities were represented in the Canadian military contingencies who served in WWI.

Dr. Fedorowich still searches for more facts and artifacts surrounding WWI, even finding some unique treasures in Killarney's local museum.  Museum curators, Joyce Dietrich and Ann Magwood were delighted to share a wealth of local history through the thousands of photos and artifacts that adorn the display cases and museum walls.

Ann Magwood was recently visiting dearest friend and local resident, Christena Friesen, who had her father's enlistment document dated Jan 4, 1916, hanging on her wall.  Private Angus Graham joined the 222nd Battalion, the Canadian Expeditionary Force during the First World War.  The 222nd was based in Winnipeg and started recruiting throughout the province in 1916.  After sailing to England in November of 1916, onboard the RMS Olympic, the battalion was absorbed into the 19th Reserve Battalion in early 1917.  Pte. Graham also served in WWII as a prison guard in Alberta and eventually worked at CFB Shilo when the family moved to Homefield, east of Killarney.

This historical document of Pte. Graham's enlistment was something that Dr. Fedorowich had not seen before.  Yes, there are still many historical treasures to be found!

After close to 40 years of sharing his passion of history with his students in the classroom, the now retired professor is spending the next number of weeks delving into more of Manitoba's local history.

"I'm retired from teaching but I'm still writing and publishing," he adds, "and that's what I'm doing while I'm here.  I'm doing work in Brandon, I've done work in Winnipeg, doing the local stuff.  I need to see what else is in other museums!" 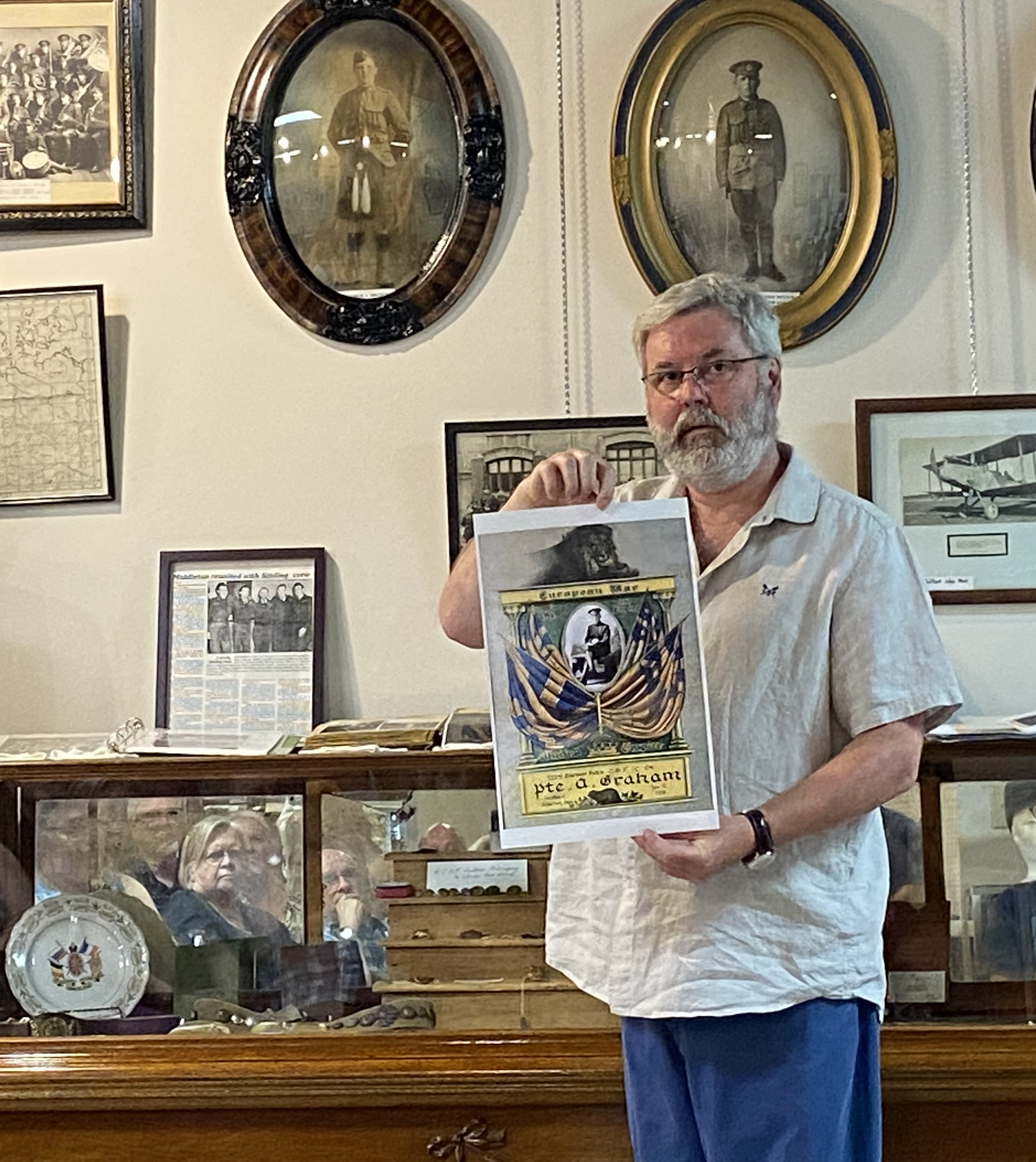