Written by Staff Monday, May 23 2022, 6:00 AM
Article continues below advertisement ↴

A recent ruling by the Supreme Court of Canada has Manitoba's Minister of Justice upset.

Kelvin Goertzen says over two decades ago, voluntary extreme intoxication was barred as a defence under the Criminal Code of Canada, however, that has changed.

"The Supreme Court, on Friday of last week, said the fact that you voluntarily got so intoxicated and then committed a violent crime, you should be able to use your intoxication as a defence. I think most Canadians would find that not appropriate and probably bring into question the administration of justice."

Goertzen noted, there may be a way to resolve this issue quickly.

"The supreme court also said that there are probably ways that Parliament could change the law to not allow this as a defence. There are ways, negligent laws, and different sorts of ways where you could create an offence such that you wouldn't be able to say 'well I was too intoxicated to know what I was doing' and that is what I am asking the federal minister of justice to do and do it quickly."

Goertzen says the supreme court has actually invited Parliament to put a new law together. He notes he has already sent a letter on behalf of the Province of Manitoba.

"I have as an initial step, reached out to the federal government and said 'I am willing to work with you, my provincial department of justice officials are willing to work with you to craft a new piece of legislation to go to Parliament to ensure that this loophole gets fixed.' I think there is a way that it can be done relatively quickly."

In addition, Goertzen says he will be speaking with other provincial ministers of justice and encouraging them to do the same. He feels an all-hands-on-deck approach is needed to resolve this issue as quickly as possible.

Justice Minister Kelvin Goertzen's full letter can be read below 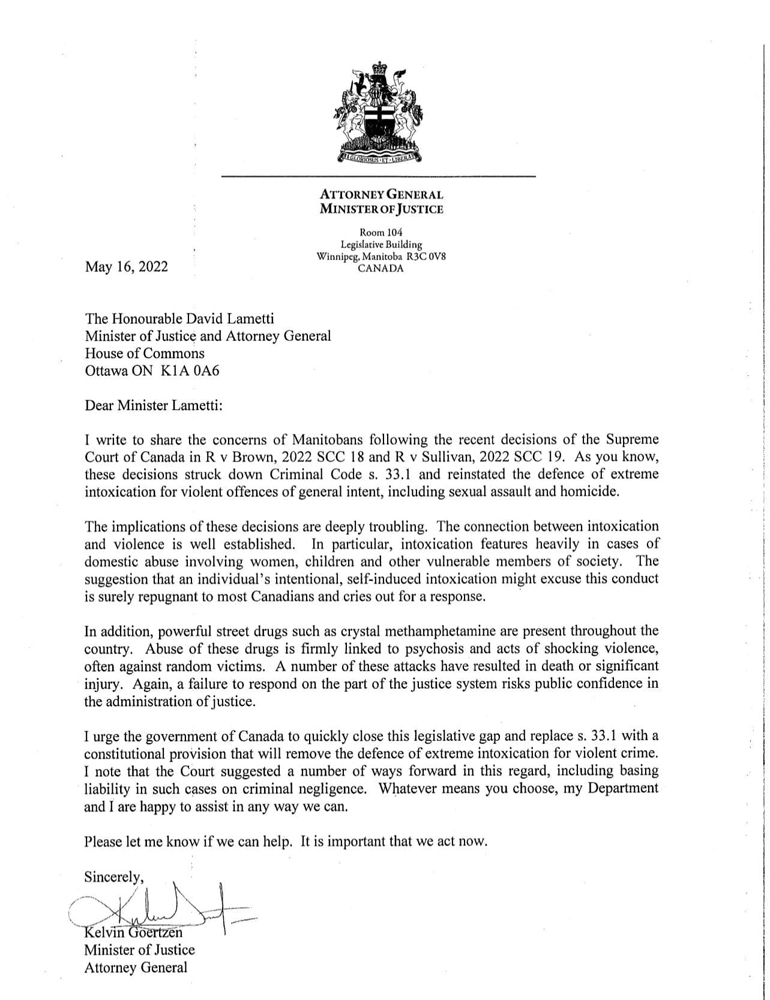