Aquatic Invasive Species (AIS) continue to be a concern for Manitobans as boaters and anglers travel from affected areas to lakes and rivers.  Last week the Province shared a media release reminding boaters, anglers and other water-body users to remain vigilant as the open-water season ends.  Properly inspecting all watercraft and all water-related equipment is important in the fight against AIS.

‘The province is actively working to stop the further spread of highly invasive species such as zebra mussels, but visible adult zebra mussels continue to be found on watercraft reporting to provincial watercraft inspection stations across Manitoba,’ states the Province.

Nolan Sawatzky is the Manager of Conservation Stewardship with the Manitoba Wildlife Federation.  He encourages all Manitobans to do their due diligence in helping to stop the spread of Aquatic Invasive Species, such as the zebra mussels.

“These are species that are not native to the area and have been introduced to a water body, and because of that they don’t have any natural predators,” explains Sawatzky.  “They are able to reproduce, multiply and out-compete the native species as there is nothing to restrict their population growth.  This wreaks havoc on the natural environment and native fish populations.”

Because these non-native species are often prolific the results can be catastrophic.  Anyone who has seen the mounds of zebra mussel shells on Beaconia Beach, northeast of Winnipeg on the shores of Lake Winnipeg, also sees the devastation this species can cause a body of water and its beach front. Not only that, zebra mussels will attach to boats, docks, props and anything they can latch onto.

“The rate of growth in some of these AIS species, such as zebra mussels, is pretty remarkable,” adds Sawatzky.  “One adult female zebra mussel can lay 1 million eggs per year, so the rate of expansion can outcompete a native species in a short amount of time and that is one of the biggest concerns.”

Prevention is the only way to slow the spread of AIS, as once they have infested a lake or river, the solution is extremely expensive or not possible.

“It’s very important for people to understand how big these issues are and to know their role in preventing the spread, because that’s our main way of combating this AIS is just through stopping the initial intake into the water bodies.”

It is illegal to possess and transport AIS in Manitoba and water users must inspect and remove AIS from items such as powerboats, canoes, fishing gear, anchors and hunting decoys before leaving the shore of a water body.  But this poses a few challenges.

Zebra mussel larva (veligers) are microscopic and cannot be detected with the human eye. They can be hidden inside of motors, propellers, live wells, on life jackets and fishing lures, on boat anchors and ropes.  Once a veliger is transported to a new water body it doesn’t take long for it to grow and lay it’s million eggs in the first year.

Veligers were found in all 9 samples ranging from 2-12 veligers per sample.  Further sampling revealed zebra mussels were in various life stages, indicating they are reproducing in that lake.

The second challenge is that there are only a handful of decontamination centres scattered through the province, leaving proper cleaning to boat owners, who aren’t always diligent when leaving an infested lake or river and don’t think twice about backing their boat/trailer unit into a lake that has no such species.

The infestation in Lake Manitoba adds to the list of zebra mussels already found in Manitoba waterways, such as Lake Winnipeg, the Red River, Cedar Lake, the Nelson River, and Assean Lake.

Zebra mussel veligers do not survive extreme heat and cold, thus the decontamination of watercraft of extremely hot water, ranging between a minimum of 50°C / 122 °F and 60 °C / 140 °F.  Exposing your watercraft, trailer and equipment to temperatures below -10° C / 14° F for three consecutive days also kills the microscopic veligers.  Some suggest water inflatables, lifejackets, lures and smaller equipment be put into your freezer for 3 days to kill veligers as well.

In last week’s Media Release, the Province shared the following information: ‘If AIS cannot be removed from watercraft or water-related equipment before leaving the shore, a transportation authorization is available from the Manitoba government. This also applies to contaminated items such as docks and buoys that have been kept in an invaded water body. A permit is also required to legally remove zebra mussels from beaches and shorelines.’

‘The spread of AIS is preventable and the department reminds water users to follow the AIS legal requirements: clean, drain, dry and pull the boat plug whenever leaving a water body in Manitoba. Watercraft and water-related equipment must also be decontaminated before placing the items into another water body if they were last used in:

‘These requirements are in effect year-round. Failure to do so can result in fines. Examples of set fines for AIS offences include $1,296 for possessing or transporting AIS and $2,542 for failing to decontaminate prior to entering another water body.’

New AIS sightings in Manitoba in an area where they are not already known to exist must be reported immediately at www.manitoba.ca/stopais/ais_reporting.html

For more information about AIS, permits and authorizations, or the locations and operating times of the watercraft inspection program, visit www.Manitoba.ca/StopAIS.

The Manitoba Wildlife Federation features a variety of topics on their website, and soon they will be launching a new video series on Aquatic Invasive Species.  Visit www.mwf.mb.ca/ for more on their informational video series.

Below, Manitoba Wildlife Federation's Nolan Sawatzky, shares more on decontamination procedures and why it’s not as easy as taking your boat and trailer to a car wash.  He encourages everyone who is coming from a control zone with watercraft and equipment to follow the recommended CLEAN, DRAIN and DRY. 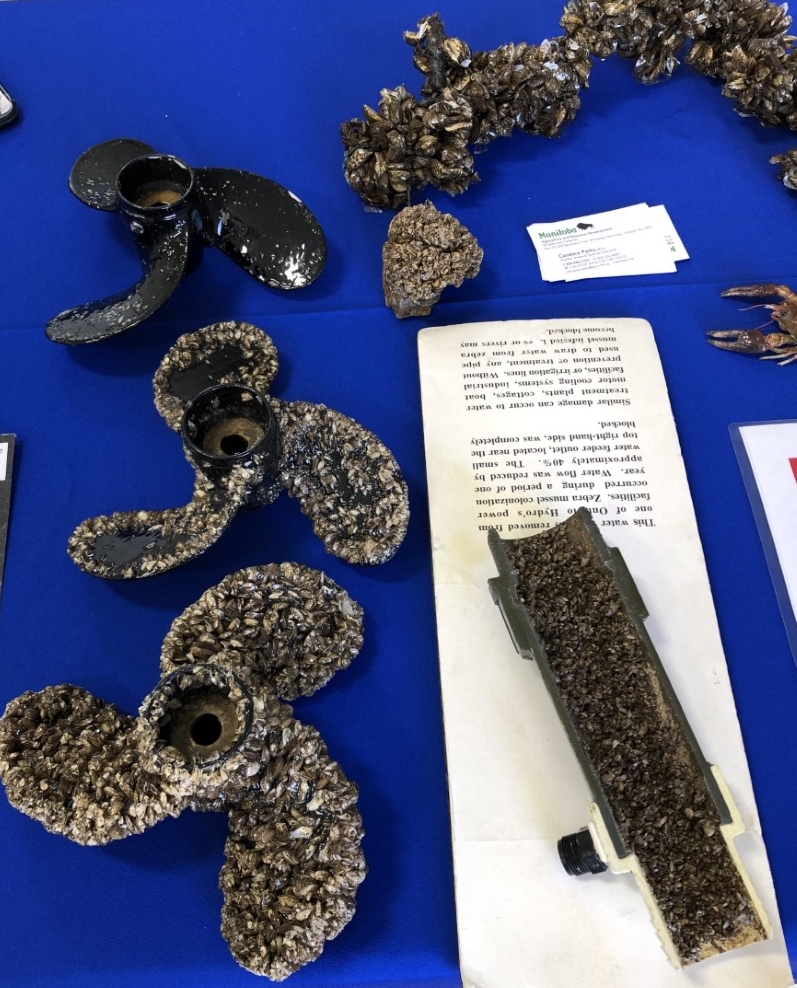 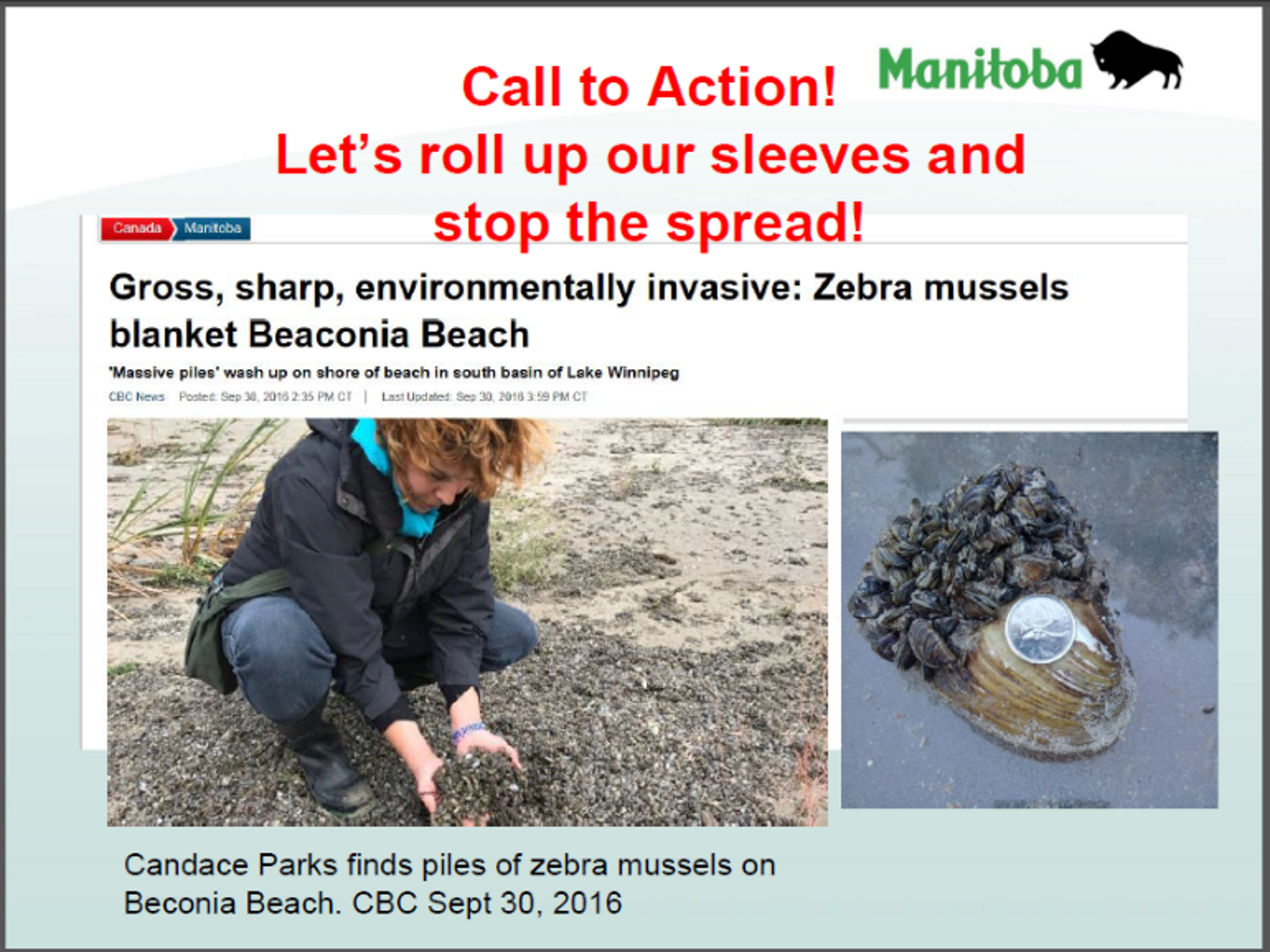 Giving back to community one pumpkin at a time!