Welcome to Vantage Points Flashback. We look through local history for stories that shed light on present day realities.

Please listen to the recorded audio of this story with historian David Neufeld below.

Rural folks generally know their directions. We're raised, after all, on squared off prairie land. When driving, every grid road heads directly north, east, south or west. We speak in directions. “Oh! That family lives west and a bit south”; frustrating visitors who don't know where to look. We don't point. We just know.

In contrast, at Grasslands National Park in south-central Saskatchewan you can visualize the pre-surveyed prairie, home to bison and their hunters. No straight lines. The land needs to be described to indicate direction, using features like trails, trees, creeks and ridges.

In another contrast, Manitoba began with a river lot system. In the mid 1800s the French Metis used rivers as their survey base. Every landowner needed access to the river for water, fishing and transportation. Homes and gardens were near the water. Most lots had trees for firewood with more land further back for hay and animals. Each waterfront was about 300 feet wide. But because the Red and Assiniboine Rivers twist and turn, the lots differed in shape and size.

By 1868 Canada made it clear, they wanted the Prairies covered with farmers who'd grow food for export. In order for the farms to be relatively equal, they decided to survey the entire, vast landscape into square miles, using compasses, metal chains, and a lot of lonely men with camping gear.

The survey chain we speak of, is actually a metal chain. Each link is 8 inches long. 100 links, equal 66 feet. (Take my word for it.) 80 chains equal 1 mile. Unfortunately, with vigorous use, the links would stretch. The surveyors had a massive area to cover, though. And, they were being paid by the mile. So speed was their friend.

The entire prairie grid started with two lines. The Baseline goes due west, alongside the 49th parallel. The Principal Meridian goes due north from Emerson. As the survey crew was marking the principal meridian in the summer of 1869, they crossed over Metis owned river lots at St Norbert. Due to the urgency Canada felt in completing the survey, and, truth be told, their disrespect for the Metis Nation, the Metis river lot titles were not respected. Thus, was born the Red River Resistance.

Louis Riel led an armed delegation to literally step on the survey chains. If Canada was to exert control over the land, the Metis were going to negotiate for land title and French language rights. It was through this resistance, that the Province of Manitoba was created. But Canada sent in the army. The Metis Nation was cheated. And the resistance goes on. We'll return to this in a future story.

Back to the chains.

The prairie survey proceeded in 1872. Since the Americans had used chains for their westward expansion, Canada simply copied their measurements. 160 acres, or a ¼ section, was considered a reasonable farm for one family. Each ¼ section, half mile by half mile, gave 4 farms per square mile. By 1880 the crews got to Southwest Manitoba. The next two years saw thousands of immigrants from Ontario, USA and Britain claim their quarters. This wide open, rolling land, was squared off and repopulated.

Land Survey was adapted from a story in Vantage Points 1. To hear past radio stories, go to discoverwestman.com/community or CLICK HERE!. Please go to www.vantagepoints.ca to learn about Turtle Mountain Souris Plains Heritage Assoc. Thank you Municipal Councils and Manitoba Heritage for your support. 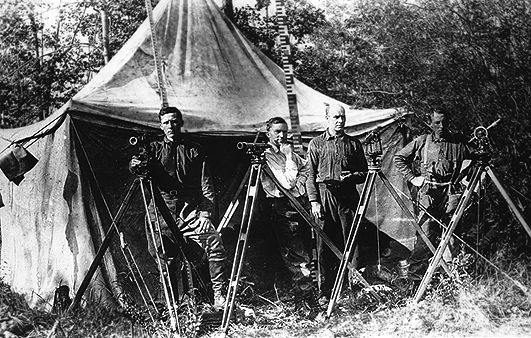 It's 'I Love to Read Month' with CJRB & Killarney Optometric Centre

Foundation puts the call out for applications